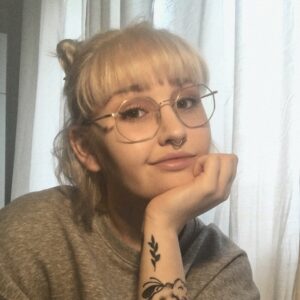 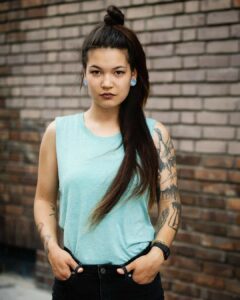 On our blog you can read about female rappers from all over the world who suddenly land a hit on the relevant social media platforms – especially on TikTok – and go viral in no time. For some artists, the success lasts shorter, for others longer – the US rapper Ashnikko belongs to the second group without any doubts. With the #StupidChallenge and the accompanying song “STUPID (feat. Yung Baby Tate)”, she reached over 215 million views in a very short time – yes, you read that correctly. Chart placements and some awards followed faster than anyone could have guessed before. Just in time for her 25th birthday, she released her debut tape “DEMIDEVIL” on February 19th this year, with the track “Daisy” reaching platinum status. Whatever Ashnikko is releasing – with her unique voice and outstanding style and attitude, she always manages to excite her audience! After all this, the rising artist agreed to do an interview with 365 Fe*male MCs. In conversation with Ana Ryue, Ashnikko talks about what her unique style means to her, nostalgic 90s-pop-hits and the pressure social media puts on artists’ daily business.

Hey Ashnikko! Let’s start with something that happened recently: Halloween. I know you really love Halloween. What have you been doing this year to celebrate it? Did you enjoy it?
It really is my favorite holiday! I love to go like trick-or-treating and throw dinner parties with pumpkin-spice-everything. It is always very hectic for me around Halloween, but in a beautiful way ’cause I get to dress up like all that insane creatures! This year I was a moth for a livestream I did on TikTok. And then I was a spider-bride, so I had like a lot of spider eyes on my face and was wearing an 80s-Madonna-bridal-dress.

That sounds so great! Not only on Halloween do you have a very striking style and appearance. I actually think you are one of the most outstanding artists in the whole music scene when it comes to that. Did you have something like a vision of yourself, your attitude, and your appearance before you started making music? Maybe there is an anime or game that was in your head and inspired you?
No, definitely not. I am not that organized (laughing). I definitely let my personal style unfold and it was a hot mess for many years. I feel like I have only really found my personal style within the last three years. There was no planning involved, just throwing shit at a wall, and seeing what sticks.

Is your style in some ways about emotions, too?
Yeah! Right now, I am on my fairy-core-old-victorian-mood-board. I am just following my heart, but my style will always be changing depending on my mood.

You did not only develop your own style but a really great standing in pop culture. You already did a lot of features with artists you were a fan of in your teenage years. Have you already reached all your goals when it comes to working with other artists? Or is there anyone you still really want to work with?
Oh, I would really love to work with Dolly Parton! Or Joan Jett, Nicki Minaj. Manifesting!

Hopefully! You once said that you haven’t listened to male artists until you were 16 years old. Was it hard for you to find queer and female icons back then?
I mean – I was just listening to all the pop-girlies while growing up. They’re all queer icons. Like the women I talked about in the question before. There are such a lot of powerful women in music!

And was it an active decision to only listen to queer and female artists? Or did it just happen?
I saw something of myself in these artists. Especially, I saw something I wanted to become. They inspired me so much to be myself. So yeah, it was like a confidence boost for me as a little awkward child. I started getting into pop music at like ten years.

A lot of the music from back then is coming back right now, especially the 90s and 2000s. Are you enjoying that comeback?
Yeah! It’s cool that stuff is back. Also pop-punk is having a revival right now as well. I am excited to see that. But it is weird to be old enough to now being able to go back to that time. It’s like – wait fuck, it is so long ago already? But I like it, it’s nice, everyone loves a little bit of nostalgia.

Totally! It’s not necessarily the music coming back but all the memories and stuff.
Oh yeah, exactly!

You once said, your music is not intended to be a parody. Do you feel misunderstood sometimes?
I understand my music and my fans understand my music – that is all I really care about. If people take it as parody or don’t like it – that’s none of my business.

Especially when you sing about mental health issues and deep topics in general, it’s important to be taken seriously, isn’t it?
I mean, I made a lot of music only for myself. As long as it feels genuine and it’s coming from a real and authentic place within me, then I feel like I can be proud of it. That’s all that matters.

If you would have to choose between writing or performing songs for the rest of your life, which one would you pick?
Uhm…. so, when I choose performing, I can only perform the songs I have written until now?

Yes.
Then probably writing music… it is a hard decision. I love performing with my whole heart, but writing was my very first love.

You went viral on TikTok in 2019. In the last years, social media and the internet in general have changed a lot. Do you think the current development brings new chances for newcomers or does it get more complicated?
Social media is just a tool! The art you pull up behind that tool differs from person to person. It’s all about how you use it. If you can manipulate the system and you can use it for your advantage – respect! It really can be a great tool for new artist. But you have to use it in a nice, fresh way – not being cringe with it.

Is it hard for you to create content and be active all the time?
Being active on social media is painful. It is something I actually have to think about and force myself to do. If I had it my way, I would just disappear for years and just post when I am bringing out music. So yeah, it is definitely something I have to force myself to engage with.

So, would you describe social media as part of your job?
Oh yeah, that’s when it all feels like work. Everything else, like performing, making music and stuff, that‘s fun, that’s the dream. But social media is when it feels like an actual job.

Is it hard for you to stay connected with your community then? There are millions of people who are following you and probably also writing DMs.
I find it really sad sometimes that I can’t communicate with my fans on a personal one-to-one-base. Just because I can’t really read comments or engage like that without really damaging my health. But I think they know that I care about them, and I appreciate them every single day of my life. I think it’s a very beautiful community, they’re all so intelligent and funny. When we do meet at shows, it‘s like the highlight of the tour.

What was the biggest you learned from being a full time musician for almost three years now?
It is really hard to put a value on some things. It is tied to your spirit and who you are as a person. It is a fine line, like walking on a cliff. It is all about making art and it makes you feel joyful, but you have to figure out what you wanna tell the public and what you want to keep for yourself.

Caring for yourself is really important, especially when there is so much attention and pressure. Did that have an impact on your creative work? It is hard to be under pressure to be creative?
Yeah, I mean I love being creative. I have the added bonus that it pays my bills. I love songwriting and creating visuals for my stage production and stuff, finding artists to work with and create things with them really is fun. The last tour was very exciting, there were a lot of screen visuals and I had tentacles on stage and styling boards. It was beautiful to have all that. There is a pressure to be creative, to create all that – but I just really love it.