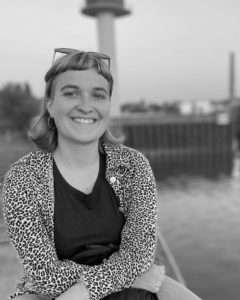 Mabiland is a ground-breaker in Colombia’s male-dominated Hip Hop and Urban Music scene: she is a woman, she is black, she is queer, and she brings together rap, R&B, and neo soul in her music like no Colombian artist before her.

At the age of 17, Mabely Largacha (aka. Mabiland) moved to the Colombian metropolis of Medellín to study. She grew up in Quibdó, the capital of the El Chocó region. She has been writing poetry since she was 12, and later song lyrics. In Medellín, Mabiland began studying audio-visual communications and, after winning a singing competition at university, began singing in bars and producing music videos at the age of 19. Then in 2018, for her debut album, Mabiland put all of her eggs in one basket: putting her studies on hold, using a scholarship and all her savings to completely focus on producing her first LP.

Her debut album bears her birth year as its title: “1995”. While Mabiland was more oriented to the blues, jazz and soul genres, in her five-track first EP “Ciclos” (2015), she fully delves into neo soul and R&B in her first longplayer. Sometimes she raps hooks in a smoky voice and one second later intones a soulful chorus in a crystal-clear voice. Mabiland manages to carry her emotions on her tongue, but also in her voice: at some points she is fragile and tender, almost whispering in a spoken-word manner. At other moments, her rapping and singing radiates the nostalgia, anger or joy that she sings about in her lyrics. Her direct lyrics are about sex and (unrequited) love, as in her two most successful songs “Qué tu Quieres?” and “Cuanto Más”. But Mabiland also openly addresses her independence, dreams, childhood and family history, and the reality of her life as an Afro-Colombian queer woman.

Mabiland is accompanied by a soul band. On her LP there are few electronic beats, but intros with Hammond organs and piano, funky and soulful basslines, saxophone and electric guitar solos. This is rare now in a HipHop and urban music scene that has been dominated by autotune and trap beats for some years now, even in Latin America. At some points, her flow is reminiscent of Latin-American rap legend Ana Tijoux and her vocals of US-American R&B and soul artist Erykah Badu.

Mabiland’s plan to focus fully on her music paid off. After the release of “1995”, she went on tour in Latin America and Europe in 2019, playing, among others, the biggest Colombian rock and pop festival, Estéreo Picnic, and the Glastonbury Festival in the UK. One thing is certain: Mabiland won’t be silent anytime soon. Between 2019 and 2020, she has released twelve singles and two EPs. She has not limited herself to neo soul and R&B but experiments in featurings and alone with genres such as reggae, Hip Hop, trap, reggaeton and afrobeat. Therefore, we can expect that there is still a lot more to come from Mabiland in 2021.