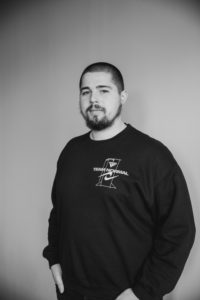 Do poetry slammers also know how to rap? If you ask 22-year-old Liser from Cologne, the answer is a definite “yes!”, since the roots of the newcomer lie in the battle of the poets. Even if she only took place in these competitions, according to her statement, because she thought she was not cool enough for rap.

For Cologne’s underground scene, Liser’s change of formats is a win. On her various releases, which she usually publishes on streaming portals like Spotify, it seems like a walk in the park for her to switch in between the different styles of modern hip hop. The connecting link is an autotune effect, which Liser uses sometimes more frequently, sometimes less, depending on the songs. While her EPs “Origami” and “Scheiß Emanze” (both released in 2019) are on the quieter side, she lets her muscles play on the “Easy Bangerz” EP with her counterpart, Hamburg’s MC Zirkel.

Her songs “Zu leicht”, “Tildin” and “Krank” really wake the urge to listen to more and more of her beats. In a way, her sound is reminiscent of a weird mixture of Haiyti and Loredana – which might require a little getting used to but after the first few listening rounds, you love it. If Liser continues to progress in leaps and bounds, she is looking into a golden future in the German rap scene. It was not coincidental that she had won several local rap competitions like the “Bring your own Beats” contest, which opened the door for her to perform at Juicy Beats Festival in Dortmund. Liser has told the Cologne-based music magazine choices.de that she is incredibly happy with her success. “To get recognized as a musician is proof to me that not everything I am doing is going straight into the void, and that’s very important for me.”

Liser derives her lyrical inspiration as well from the city she lives in as from her environment. Poet-like she writes on Twitter: “Everybody in my entourage lives with the dooming knowledge that every little shitty fucking interaction could turn into a fucking amazing song, and they love it.” Let us wait on more fucking amazing songs but please, not too long, Liser!