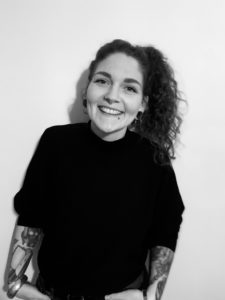 Machete en Boca –  English for (the) “machete in the mouth”! A name of a band that could not be better suited to the formerly four, now only three powerful female MCs and the DJ/producer False Idol. This formation has been one of the most famous names in the Spanish rap scene for several years now – especially due to their thoroughly opinionated appearance!

What started as a small music project of the rappers La Prima Rap and San who released the first LP “M.E.B.”, quickly developed into a group that grew with the addition of rapper La Charli and was finally complemented  by rapper JazzWoman in 2016. The latter left the band after two years at the end of 2018. During this period of collaboration, the band released two more albums: 2016 “Vol. 2 Venir A Jugar” and “Vol. 3 A Machete Voy”, of which the latter in particular received a lot of attention throughout Spain. The rappers La Prima Rap, San and La Charli (as well as the former member JazzWoman) are known for their critical, feminist and combative lyrics with which they not only draw attention to social and societal injustices, but also stand up for more diversity and respect. In all cases, the band’s name “Machete in the mouth” reflects their program: While rapper San is strongly influenced by Reggae and Dancehall, La Prima Rap features harder, hardcore inspired elements as well as classic Flamenco-/Salsak sounds, DJ False Idol brings electronic influences into the game and rapper La Charli follows more classic Old School Rap. All in all, an explosive and diverse mixture of militant lyrics, female empowerment and dance, with which the rappers have already scored on numerous stages and festivals, both nationally and internationally. For example at Cabo de Plata, Viña Rock or EXTREMÚSIKA or “Jenseits von Nelken und Pralinen” 2019 in Berlin.
Even though the band announced in January 2020 that rapper La Charli will leave the band for personal reasons, several dates are already scheduled for the coming months of 2020, when the band will present their own new music. Probably including this brand new single “Se feliz” of La Prima Rap featuring ArtoDeLaProsa from the album already announced for 2020.